Lebanon crisis: everything else pales into insignificance

I’m not quite sure why, but the Israeli bombardment of Lebanon has had an effect upon me far greater than any other armed conflict in recent times.

All conflict is awful, but hearing about Sunday’s air strike on Qana, Lebanon (a massacre which killed at least 54 civilians, mostly children) pushed far enough outside my ‘comfort zone’ that I feel inclined to write something. I just wish I could be as more eloquent in the way I am able to put my thoughts to paper. 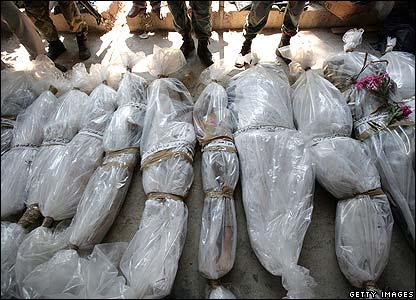 The whole conflict, on both sides just seems so meaningless. But the sustained volley of attacks by Israel upon the civilian targets (intended or otherwise) in Lebanon has just been barbaric. For a race that was quite rightly outraged by the genocide of their own civilian population during WWII, it’s disappointing that they are able to commit acts which begin to verge into similar territory 60+ years later. I can’t see how bombing targets (most of which seem to hold no millitary significance) that will knowingly result in such widespread civilian death isn’t a form of extermination.

This conflict lacks any real objectives, with no exit strategy and no positive outcome regardless of what happens. Hezbollah’s once radical following gains ever more mainstream following. Israel continues to upset the stability of the region. People die.

But my shock and disbelief has turned to anger and disgust with both my government (UK) and the US government.

I’m angry with Tony Blair for pushing for a conveluted ceasefire proposal via the UN – during which time countless people will die – when clearly more imedaite options at his disposel (such as denouncing on behalf of the UK the attrocoties commited on both sides, putting direct presure onto George Bush and starting UK-sponsored peace talks) would be far more effective at saving lives.

I’m angry with the UK government for allowing Israel to use Glasgow Prestwick (a civilian airport used by holiday makers) as a discrete stop-over point for planes delivering missiles from America to Israel — hoping that no one would notice.

I’m outraged that an ever-smiling Condoleezza Rice has the audacity to turn up in Beirut to survey the damage done by bombs that were probably distributed to Israel by her agreement as former National Security Advisor and now Secretary of State to the US Government.

And I’m disgusted with George Bush and the rest of the Neo-Conservative Government of America (which thrives on ongoing significant wars during it’s time in office) for effectively giving Israel ‘seven days carte blanch to do what it wants with Lebanon’ before a peace deal is even begun to be considered.

Yes, I know I’m embarking on a US visa application, which generally requires a bit of a ‘lick your arse power trip’ towards the US authorities. I don’t care whether US Immigration officials visit this blog and read this or not. I feel strongly enough that this goes beyond my immediate circumstances, AND I am condemning my own government just as much as the US.

But my biggest disappointment has stemmed from this photograph, which shows Israeli children writing messages on missiles that are due to be dropped onto Lebanon.

From other photos from this scene (such as those contained in the video below) it’s clear that the little girl is writing ‘with love’ sarcastically on the bomb.

Sure, I’m getting sucked into propaganda here, but one is left feeling so disappointed with the youth of Israel for not standing up to denounce the violence upon Lebanon.

People will no doubt accuse me of being biased towards the Muslim population. But as an atheist bought up by Buddhist parents I’m pretty impartial about both the Jewish faith and Islamic faith.

I have to admit I generally dislike the concept of any and all religions – it’s always been the number one cause for segregation and conflict in, and is used ultimately as a control/influence mechanism for society.

I’m also not a supporter of Hezbollah either. My concern is with the civilian population of Lebanon, most of whom innocently go about their lives without any involvement terrorism.

Tony Blair has sold us too many times now, and Britain has had its reputation as a respected, moral and just global player severely dented.

What you can do:

Watch this excellent video (made with a mash-up of BBC video and agency images, nothing to do with me), share it with your friends, post it upon your blog:

Secondly, attend the rally on Saturday in London

Thank you for reading this post – I know it’s a heavy subject but it makes you realise that the rest of this web-two-point-zero bollocks is pales into insignificance when compared to what’s really going on around us.