The BBC, in partnership with Oxford University, is inviting the public to join the world’s biggest online climate prediction project. 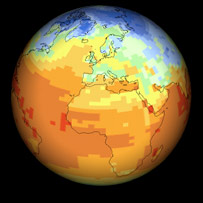 The Climate Change project asks members of the public to download a grid computing client (similar to the one used for SETI@Home) to predict future climate change.

From the site’s FAQ:

Your computer downloads and unpacks the experiment itself. The experiment will be running within about five minutes of the download finishing.

Your computer will start calculating variables such as temperature, cloud cover and snow fall.
The experiment runs in two phases:

Check out the official site for more details.

You can also check out an interview with Professor Bob Spicer [Windows Media] from the Open University.