This photo was taken over East London just after 1500 GMT on Saturday. It was taken by Barry Bland, who appears to be a credited across the net as a semi/pro photographer (which kinda discounts Photoshoping, as he’d never get work again if he had). 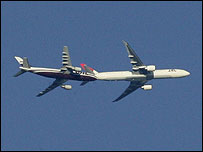 According to the BBC News article:

“The Civil Aviation Authority said no near miss had been reported and it was impossible to tell how close they were”.

BTW: I’m sorry for the lack of updates over the past week. Sofia’s family have been visiting from Sweden and so I’ve been busy entertaining rather than geeking out. Will post some more updates today or tomorrow.