Some thoughts on the BBC’s announced ‘virtual world for kids’

The BBC has announced that it intends to launch a MMORPG (ie virtual world) aimed at a 7-12 year olds, dubbed ‘CBBC World’. 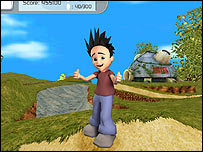 The blogosphere’s already buzzing with interest and making comparisons to SecondLife and it’s sister service Teen-SecondLife.

I’ve not worked at the BBC for sometime and I knew nothing about this project until I read about it on the BBC News Website (strangely, there doesn’t appear to be a press-release about it – but then given my previous post maybe that’s a good thing!).

However here are some thoughts about the proposition, particularly influenced by my tenure at the BBC…

Scope and Scale
The first caveat to point out is that it’s very difficult to work out just how big this proposition is going to be. From the amount of information released, what’s being announced could simply be a sophisticated bit of Flash/Director through to (theatrically at least) a direct rival to Teen Second Life.

It’s probably somewhere in the middle… The screen-shot on the BBC News website story, if genuine, looks too fancy for Flash and the BBC would have massive anti-competitive issues launching a direct rival to Teen Second Life.

So a key point to be aware of is that BBC Children’s division is headed up by ‘action man’ (sorry, in joke) Richard Deverell.

This is significant because Richard has a degree of new media experience and knowledge that you just wouldn’t normally expect to find inside the mind of the person who controls the BBC’s children’s output. In fact I would put his level of strategic savvy in this area as being one of the highest in the BBC – even compared to those who head up ‘Future Media’ – the BBC’s dedicated Internet department.

Although this is a relatively uncharted space for the BBC, it does have some great expertise in this area. Kim Plowright has been looking at virtual worlds for some time (both personally and professionally, as you can see from this old presentation) and the BBC also has a lot of gaming research compiled by Alice Tailor who is now working in for the BBC in LA.

The biggest concern many will raise about this kind of project is online safety and how will kids be protected from online predators (most would agree that the risk is overly hyped, however)

The interesting thing here is that the BBC has a very good track record in this area, particularly with the level of human moderation it uses. It’s impossible to get a comment up onto a children’s message-board without it being pre-moderated first.

Knowing that the BBC reads every message it receives on it’s children’s message boards (it says so on the rules) and looking at the volume of use they get, you can deduce (without me breaking any confidentially clauses) that the BBC has a huge moderation budget that the rest of the industry would be envious of.

Given the BBC’s existing level of moderation, it’s therefore reasonable to assume that such levels of moderation and supervision would also occur in this environment too.

Many will criticize the level and expense of BBC’s children’s moderation commitment because it doesn’t have commercial pressures to consider. However I would counter that by pointing out that I’d rather have my kids (if I had any) using a service with his level of moderation over one like MySpace (which has very little). It’s perhaps another reason why services aimed at children should not be commercialized?

Perhaps the most interesting question is around the future direction of such a service. Specifically would the BBC consider launching a similar service for adults (no, not like that), especially around a sympathetic genre such as SciFi (which the BBC has a great heritage in) or the wider vertical of ‘Cult’, which used to be a popular site on bbc.co.uk.

Clearly operating a virtual world requires a platform – and once you have a children’s service running it’s only a degree of marginal cost of get another service running on it (assuming it’s built to do so from the beginning).

I’m really pleased and excited that the BBC is getting into this area, even though I doubt I’ll ever be able to use the service (the BBC usually bars adults from participating in parts of it’s online proposition that offer interactivity with children).

I do agree with the growing consensus that SecondLife is grossly hyped now, esp it’s usage figures, even though I personally do enjoy using the service.

I don’t by into this notion that 3D is the best interface for everything from eBay to online banking, but I do think the rich-media nature of the BBC does suit such an environment.

And perhaps young people are most suited to pursuing parts of their lives in an immersive 3D environment as I do wonder whether it’s a step too far for the older generations of the mainstream adult population.

I’ve been quick to take the BBC to task on some decisions it’s made recently, however this one seems to be a good one and I think it offers the beginning of a whole new direction for the BBC.