George Bush was photographed writing a note during today’s gathering at the UN of the 150 world leaders.

Maybe he was advising a fellow world leader that he finally intends to sign up to the Kyoto Treaty? No.

Maybe he was indicating to Vladimir Putin his support of the reform proposals to make the UN more inclusive of smaller countries? Guess again…

No, George W Bush – president of the United States of America, and arguably the most powerful man in the world – was busy jotting out a shot note to Condoleezza Rice that said: 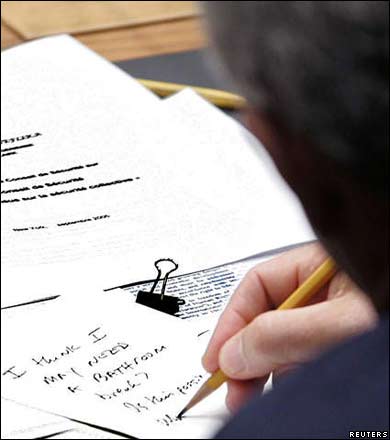 “I think I may need a bathroom break. Is this possible?”

Yes, Dubbya was asking Condi for a toilet break!

And I’m sure there’s also much to be read into the fact that his preferred writing instrument was a crude pencil rather than something “more grown up” like a fine Montblanc fountain pen.

In some respects, I’m not surprised he needed to go pee. After all, he has been taking the piss for the last 5 years.

But it just goes to prove what tell everyone with a mental age of a 4 year old: you need to go toilet before long car journeys, bedtimes and UN council meetings.

You can’t make this shit up…